It’s freezing outside and quite Christmassy, so not the ideal day for looking at the monthly jobs stats. For once, however, they brought a bit of cheer. Not a great deal, maybe, but a bit.

On the disappointing side, the rate of UK private sector job growth, having achieved a pace in the summer that Usain Bolt would have admired, has slowed considerably following the Olympics boost. The third quarter increase of around 40,000 was only about half that achieved in the second. However, there were still easily enough net new private sector jobs (65,000) to offset continued public sector job cuts of 24,000.  This along with a rise in the number of economically inactive people resulted in a further quarterly fall in unemployment (down 82,000), with all the new jobs being full-time posts for employees with permanent contracts. Moreover, the rise in full-time jobs for employees appears to be encouraging more self-employed people to seek employers rather than go it alone (self-employment is down 23,000 on the quarter). So while the pace of job creation has slowed it looks as though underemployment, and thus the overall shortage of work, has fallen slightly.
It’s also good to see a continued fall in youth unemployment of 72,000, with the best news being for the core of youth jobless not in full-time education, who are probably being helped by the government’s Youth Contract measures. The number of people long-term unemployed has remained unchanged, though with total unemployment having fallen even more the percentage long-term unemployed has increased.

But the news is less good on the pay front. Had a sharp jump in bonus payments not boosted pay packets, the latest earnings figures would have registered a sharp fall in the rate of growth rather than a steady 1.8%. With consumer price inflation still stubbornly running well above 2%, this suggests the real pay squeeze is set to continue for some time whatever happens to jobs and unemployment.

A temperature check for the UK labour market

Those economists who have been proved right to be pessimistic about prospects for UK economic growth following the recession of 2008-09 have nonetheless been surprised by what’s happened to the labour market. For example, the unemployment rate, which had been widely forecast to reach 8.7% by the end of 2012, will probably end the year at below 8%. It would be wrong, however, to conclude that this means the labour market has got off relatively lightly in the period since the financial crisis first broke. On the contrary, the degree of pain inflicted on the labour market has been as severe as expected it’s just that the pain has been felt in a different way. In particular, an unprecedented post-war slump in real earnings – caused by a mix of below inflation pay rises and shorter hours working - has served to spread pain throughout the workforce rather than, as in previous recessions, seen it concentrated on the unemployed.

Consequently, while unemployment remains the key central indicator of the overall balance of supply and demand in the labour market it doesn’t provide a full temperature reading. My consultancy The Jobs Economist (www.thejobseconomist.org) is therefore publishing a Labour Market Temperature Index (LMTI), a variant on the well-known Economic Misery Index first devised by economist Arthur Okun in the 1960s. The original Misery Index was calculated by adding the unemployment rate to the consumer price inflation rate. The labour market variant instead adds the unemployment rate to the rate of change of real earnings.

The LMTI takes into account the impact of (CPI) price inflation, nominal pay increases and changes in average hours worked per person, the latter two variables determining the rate of growth of average weekly earnings. The index is in turn benchmarked against an even temperature reading for the labour market, set at zero. A sub-zero reading is a measure of deficient demand for labour assuming that the chosen even temperature benchmark reflects the sustainable (or structural) rate of unemployment and the sustainable rate of average real weekly wage growth. Sustainable in this context means the rates consistent with the official policy target of 2% CPI inflation, which on the basis of estimates currently implicit in economic modelling by the independent Office for Budget Responsibility (OBR) corresponds to an assumed sustainable rate of unemployment of around 5% and sustainable real average weekly wage growth of around 2%.

The LMTI should be considered a temperature index rather than a misery index since its purpose is to gauge fluctuation in the demand side strength or weakness of the labour market rather than measure the precise extent of human distress or misery this causes. Although any sub-zero LMTI reading will increase misery, the same overall temperature reading can give rise to a variety of configurations between pay, hours of work and unemployment, with those resulting in higher unemployment generally thought to be the source of greater misery. The post 2008 configuration is therefore likely to have been associated with less misery than the higher unemployment configurations witnessed in the wake of the 1980s and 1990s recessions.

The figure below shows how the UK’s LMTI has fluctuated since 2000. Prior to the recession of 2008-9 the overall temperature reading was close to or above zero. Unemployment at that time was likely to have been close to its underlying structural rate, with the strength of demand for labour resulting in higher real wage growth for people in work. Since then mounting labour market weakness has shown up in a combination of higher unemployment, shorter working hours and real wage reductions. Comparing 2008 and 2012 the net reduction in demand for labour as measured by the fall in the LMTI is more than twice that indicated by the rise in unemployment. The cooling shown by the LMTI is thus more indicative of the overall degree of pain inflicted on the labour market since the start of the financial crisis. 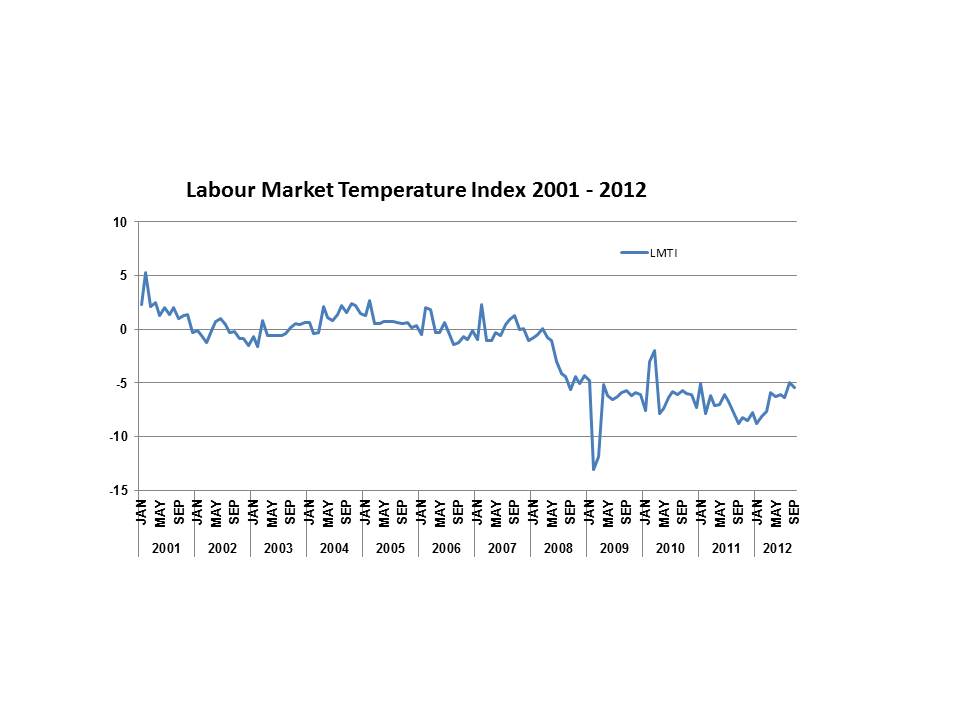 The labour market was at its coldest in February 2009 with a LMTI reading of -13. Things warmed up a little in early 2010 but cooled again in 2011. Though the labour market temperature has improved in 2012 in response to a fall in unemployment and moderation in the squeeze on real earnings, sub-zero conditions continue. Indeed, a projection of the LMTI based on the latest OBR economic forecast, published last week alongside the Chancellor’s Autumn Statement, suggests a further period of cooling in the near term with subsequent warming to 2018 doing no more than easing the chill.  If the OBR forecast proves correct the UK labour market will eventually have suffered a sub-zero decade, still be feeling cold, and some distance from returning to the pre-financial crisis climate.
Posted by John Philpott at 01:06 2 comments:

Autumn Statement: the Octopus strikes back

I’m getting old. Set piece parliamentary events like today’s Autumn Statement only serve to bring out the cynic in me. The current Chancellor of the Exchequer seems even more adept than most of his recent predecessors at pulling the smoke and mirrors trick in order to make the fiscal arithmetic look better. And listening to him address the House of Commons this lunchtime one might even think the Office for Budget Responsibility (OBR) had painted a fairly rosy outlook for jobs. However, a closer look at what the OBR actually published today offers a rather different perspective.

Although, as the Chancellor stated, the OBR has lowered its forecast for the peak in unemployment from 8.7% to 8.3%, it nonetheless paints a very bleak outlook for the UK labour market in 2013. The number of people in work is forecast to be unchanged between Q4 2012 and Q4 2013, the employment rate is forecast to fall from 58.4% to 58.1%, the number of people unemployed is forecast to rise by 100,000 with the unemployment rate increasing from 7.9% to 8.3%. Whatever the medium term employment impact of the policy measures contained in the Autumn Statement, the OBR clearly does not expect these to help the jobless in the short term.

When I predicted public sector job losses on this scale in 2010 I was ridiculed in many quarters, most notably by Conservative MP Michael Fallon who verbally attacked me during an oral evidence session before the Commons Treasury Select Committee suggesting that I had the professional “credibility of a dead octopus”. Mr Fallon, now a minister in the Business Department, has been doing the post Autumn Statement media round this afternoon defending the Chancellor’s policy record. He was wrong in 2010 and didn’t sound very credible today either. I suggest Mr Fallon consult the seaweed, it might offer him a way forward.